The Lord God the Almighty

Theme:  People wonder to whom they should give ultimate allegiance.  Who deserves to be worshiped and praised?  The book of Revelation teaches that God alone is worthy of all praise, wonder, and awe.

Please interpret the meaning of the following verses.

The interpretation of the verses is in bold print which follows the original verse in regular print.

Revelation 4:1 and 2, “After this I looked, and, behold, a door was opened in heaven: and the first voice which I heard was as it were of a trumpet talking with me; which said, Come up hither, and I will shew thee things which must be hereafter.   2. And immediately I was in the spirit: and, behold, a throne was set in heaven, and one sat on the throne.”    At this point, John is exiled on the Isle of Patmos.  He received a vision from the Lord, was temporarily taken up to heaven “in the Spirit”, to receive the Revelation of future events.   The Spirit took control and he observed the One sitting on the throne.  The heavenly trumpets usually announce that God has something to say, and anything else was a distraction.  We are to be solely focused on God.  “Behold” indicated that John is to be shown or informed of something important.   Nothing that we, or the church can do to entice God to invite us to be in His presence.   The invitation comes from God alone.   God does not enter into our presence, but by invitation from God, we enter into His.   John is in the presence of God, where power and authority abound.   Jesus said that heaven is God’s throne (Matt 5:34).   When we are privileged to be in His presence, nothing else matters but to praise and adore Him.

* v.3, “And he that sat was to look upon like a jasper and a sardine stone: and there was a rainbow round about the throne, in sight like unto an emerald.”   John has the incomprehensible and indescribable task of relating what he observed.  John could not use anthropomorphic (personification) terms to inform what he saw.  Therefore, he said that the Lord’s aura was like that of precious stones: jasper (diamonds), sardine stone (ruby red), and other gem stones that cast brilliant colors by the diffraction of light to form a rainbow, the color of an emerald surrounding the throne.   From the time of Noah, the rainbow represented God’s faithfulness to His Word, His promises, and His Noahic covenant (Gen 9:12-17).   While the stones may represent those on the breastplate of the high priest (Exodus 28:17,20), signifying God’s holiness and wrath; on the other hand, the rainbow is evidence of God’s completed work of grace and salvation.

*v.4, “And round about the throne were four and twenty seats: and upon the seats I saw four and twenty elders sitting, clothed in white raiment; and they had on their heads crowns of gold.”    This verse tells what the 24 elders were wearing, but not specifically who they were or what they did or had done.   Opinions vary:

– Angels who had significant responsibilities

– the elders represented that they were redeemed by the Lord…

and some think that they represent the twelve tribes of the OT, and the twelve apostles of the NT.   What was important was not who they were but what they were doing, sitting down in the presence of God.    The elders were clothed by God and dressed by Him as little children would be.   There was no talking among them for they may have been in awe of Him.   The crowns were not crowns of kings, but to the saints who were victorious in leading a righteous life (2 Timothy 4:8, Revelation 3:11).   The redeemed praised God for what God had done, and not for what they have done.  John sees the elders as having one responsibility, to point to God’s immeasurable grace.

*v.5, 6 and 8, “And out of the throne proceeded lightnings and thunderings and voices: and there were seven lamps of fire burning before the throne, which are the seven Spirits of God.  6. And before the throne there was a sea of glass like unto crystal; and in the midst of the throne, and round about the throne, were four beasts full of eyes before and behind.  8. And the four beasts had each of them six wings about him; and they were full of eyes within: and they rest not day or night, saying, Holy, holy, holy, Lord God Almighty, which was, and is, and is to come.”   The thundering and lightnings convey the awesome power and presence of God; and the seven lamps at the foot of the throne represent the seven Spirits, which also refer to the seven churches in Asia Minor to whom John was addressing his writings.  They were located in Ephesus, Smyrna, Pergamum, Thyatira, Sardis, Philadelphia, and Laodicea.  The seven Spirits represent the fulness of God as evidenced in the work of the Holy Spirit (Isaiah 11:2)   Since there is no sea in heaven, the crystal glass floor below the throne gave that optical appearance    The four beasts probably represent the cherubim, each with 6 wings while they and the 24 elders cry night and day “Holy, holy, holy…”  All declare that the whole Earth and the heavens were full of His glory.  The praise is to God which is the center of all things; which is central to John’s vision of God in this chapter and throughout Revelation.  The central theme of John’s vision is God’s holiness, power, and eternity.

O Lord, to receive glory and honor and power: for thou hast created all things, and for thy pleasure they are and were created.”    When anyone gives praise to God, even the beasts and the elders, they all bow down to Him.  The elders remove their gold crowns and return them to He who gave them.  All things were created by Him and for His pleasure.  The main reason is to glorify Him, especially those who have been redeemed through the church, because He is worthy to be praised.   God is perfect and complete in every way.  He did not need us, but we need Him.  Praise God for the Lamb who took away the sins of the world. 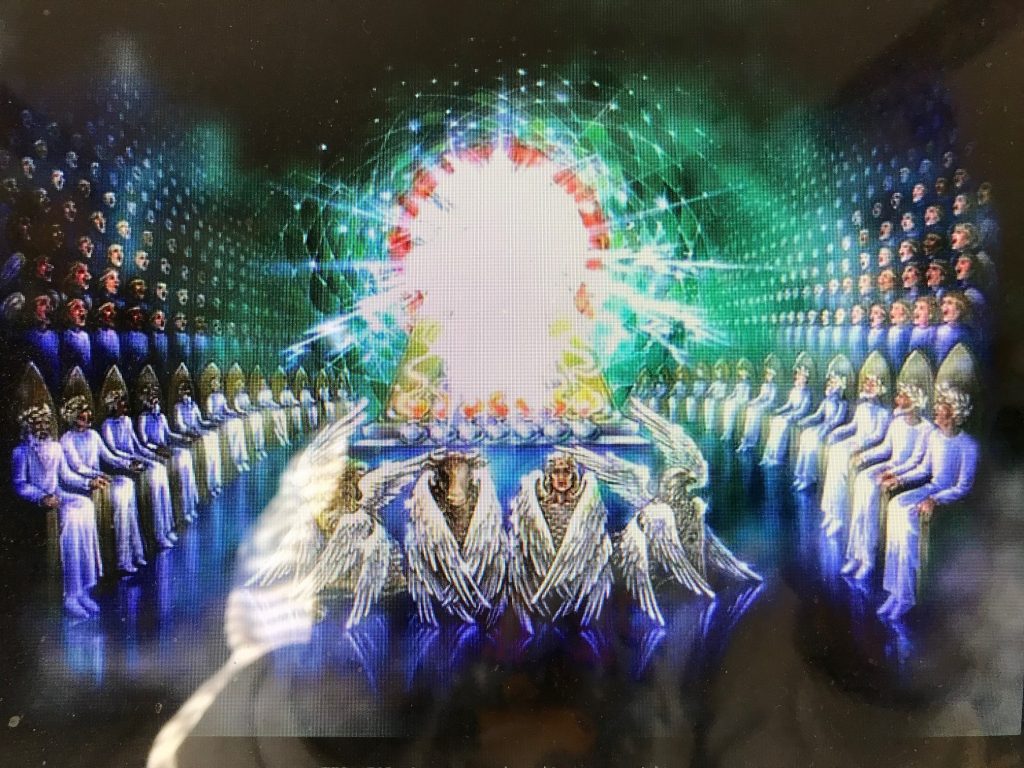